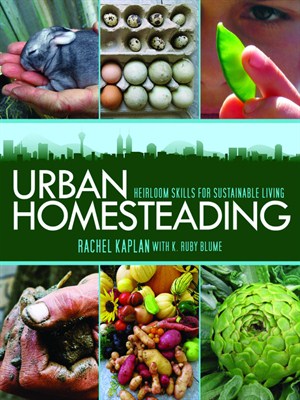 The urban homesteading movement is spreading rapidly across the nation. Urban Homesteading is the perfect guide for urbanites who want to reduce their impact on the environment and gain satisfaction from the fruits of their own labor.

Full of practical information, as well as inspiring stories from people already living the urban homesteading life, this colorful guide breaks down the lifestyle basics for any reader. It embraces the core concepts of localization (fulfilling basic needs close to where we live), self-reliance (re-learning that food comes from the ground, not the grocery store), and sustainability (giving back at least as much as we take). Readers will find concise how-to information that they can immediately set into practice, from making solar cookers and growing tomatoes in a pot to raising chickens on a tiny plot and maintaining the mental serenity of country life in the fast-paced city environment. This is a must-have handbook for city folk with a passion for the simple life.

The Anticlimactic Ending of the Great Corn Contest of 1911

After poring over many pages of newspaper, this librarian regretfully concludes that no winner of the boys’ corn contest of 1911 was ever announced.  After last week’s excerpt pleading for additional contestants, the only further mention the contest received was the following brief notice from late October:

Inconclusive at best.  Perhaps the contest was a dud due not to the boys’ enthusiasm (or lack thereof), but simply due to the challenging conditions of that year.  An equally brief article from August of the same year noted the uphill battle North Carolina farmers faced that summer:

Maybe the boys got more of a lesson in the challenges of farming than the contest directors intended that year.

Before There Was Summer Camp…

In the summer of 1911, the Chatham Record announced a corn-growing contest for North Carolina boys.  A few weeks later, this letter in the Chatham Record upped the ante in what we hope was a successful bid to lure a few more future farmers into the game:

So who won the contest?  Was it a young Chathamite? Stay tuned for the exciting conclusion to the great corn-grow of 1911!

The heat of summer is just beginning – why not try some of these refreshing beverages and tasty treats? The inspirational quotes are a bonus.

From the August 9th, 1916 edition of the Chatham Record:

July 7th, 1904 –
For all your livestock needs:
Looking for advice on how to keep your cows productive and your pigs in line? These two articles from the July 1904 issue of the Chatham Record lend some 100 year old advice to today’s farmers. Did you know that cows produce the most milk when they are happy, stress-free, and spoken to regularly? “Pet your cows, talk to them, calling them by name”, they recommend. See “Handling Unruly Hogs” for an illustration and detailed description of a helpful harness for subduing stubborn swines. (click on the articles to see a larger version)

The Secret Life of Beekeepers

Occasionally the Chatham Record would report on items featured in other news publications around the country and the world. This one comes from England, and covers a most unusual topic. From October 22, 1885:

Says an English exchange: The instance given of the carrying out at Geeston, in Rutland, of the superstition that bees will not remain after a death in the house of their owner, especially of the owner himself, unless an intimation be given to them of the fact, might be multiplied indefinitely, for it prevails over a considerable portion of England. In the case mentioned, the widow knocked at the beehives one after the other, repeating each time the formula, “He’s gone, he’s gone.” And as the bees hummed in reply it was understood that they accepted the news and would stay. In Herefordshire it is considered sufficient to tie a piece of crape to a stick set in front of the hives, and in other counties those or similar precautions are always observed by persons who would not lose their bees. It is difficult to account for this widespread belief, or to give any possible conjecture as to its origin.

I found this article just 24 hours after hearing told aloud the story of Aristaeus and the Bees from the Greek poem in four books, the Georgics – a funny coincidence, though that story involves sacrificing many cows to revive dead bees, not a dead owner. Thankfully, that particular tradition did not persist! The story is also referenced in the popular novel The Secret Life of Bees by Sue Monk Kidd, available in both print and audio versions at the library. The particular superstition mentioned in this article does persist today in some areas, according to varied sources, along with other superstitions regarding the sale and borrowing of bees. These little insects have certainly garnered their share of fame over the years! I’ll leave you this week with an excerpt from a poem by John Greenleaf Whittier entitled “Telling the Bees”:

“And the song she was singing ever since
In my ear sounds on:–
“Stay at home, pretty bees, fly not hence!
Mistress Mary is dead and gone!”